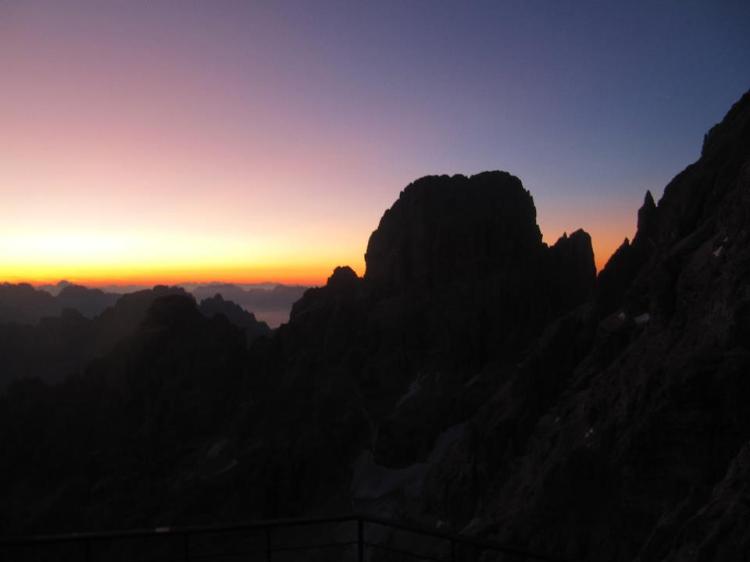 This post is part of a longer trip report. You can access the full table of contents here.

Packing up early in the morning, we took the bus into Cortina and set up camp again but in a campsite a couple of minutes away from the others, which seemed to be better equipped for camping rather than caravanning.

Getting the last bus up the valley, we got off at the chairlift station and bought tickets to the Rifugio Lorenzi.  The first chairlift is a standard modern ski lift, but the second (the Rio Gere) is an old bullet-shaped gondola, with canary-yellow paint flaking off on the outsides and reminiscent of something out of a Wes Anderson movie. On the inside, there was barely any standing space for two and one of the windows had fallen out completely. This contraption took around twenty minutes to winch us up to the top.

The setting for the Rifugio Lorenzi is really spectacular. The entire building is balanced on a rocky outcrop and secured by chains which on one side are attached to the top gondola station and on the other to a wall of rock. Walking through the rifugio the floorboards creak and you almost feel as if the whole thing will collapse into the abyss unless guests are evenly distributed throughout the dining room.

Leaving overnight things in our room, we took to the VF Marino Bianchi, a short grade 2 via ferrata to the top of Cima di Mezzo. We were the last people of the day to set out that day which meant that we got a normally busy route all to ourselves. Two hours later, after a lot of fairly exposed sections of wires, rungs and ladders, we reached the top. The view was one of the most impressive I have ever seen, with the tower’s walls dropping vertically all around us.

By the time we returned to the hut the sun was setting and the terrace had been taken over by climbers reclining in ivy-green sun loungers, sipping large jugs of beer. The focus, however, was not the sunset but a party of sportswear models and photographers that was slowly making progress along the suspension bridge at the start of tomorrow’s route. The North Face models had vertigo!

To see what we got up to on the rest of our trip or if you are looking for planning advice, the full table of contents can be accessed here. Alternatively, go to the next article in this collection: Day 5 – Grade 2 Via Ferrata – Ivano Dibona to Rifugio Ospitale.