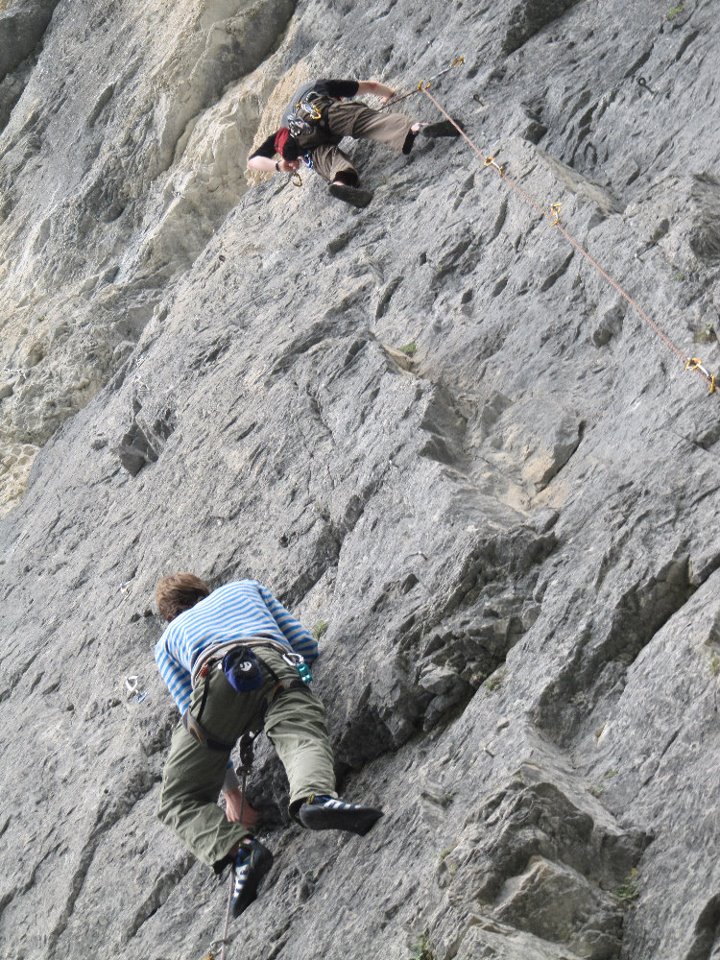 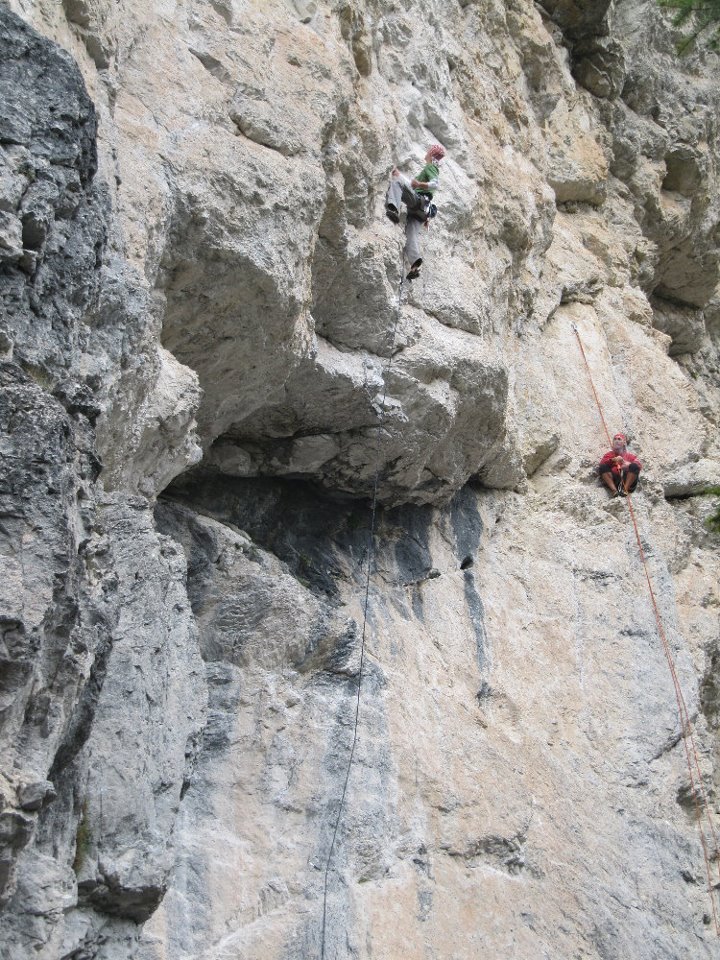 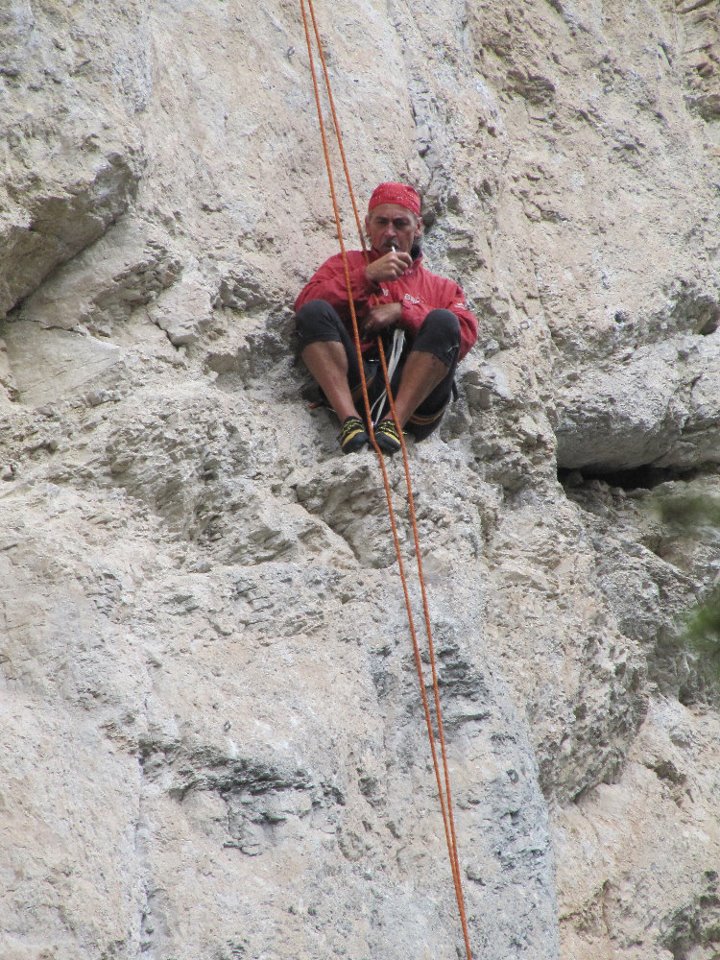 This post is part of a longer trip report. You can access the full table of contents here.

The previous night’s ‘epic’ left us feeling rather sheepish, so we decided to spend the day on single pitch sport in Landro, a crag just off the side of a road but with impressive overhangs that keep the routes dry in pretty much all weather.

Steve spent considerable time on one of the lower overhangs, pulling himself up to pose for photos before dropping back down. This now gives him ‘hard mountain man’ credibility on his Facebook profile. There were a fair few good routes but being in the Dolomites it seemed a waste to be spending time on single pitches.

While the guys planned their route for the following day, I set off back to Calalzo di Cadore to pick up my dad from the station. Flying into Verona and transferring to Cortina cannot not be done easily in one day on public transport so I wanted to meet him halfway. In hindsight, this was a bizarre and funny excursion but at the time I found it quite terrifying.

After an awkward dinner alone in a dreary hotel restaurant, I could no longer put off the inevitable. I still had an hour and a half before the Padova-Calalzo train came in, the last of the day at 22.20pm, but the waiter had already set up every other table for the next morning’s buffet breakfast and was now dozing off leaning against the bar. So I made my way downhill to the station, hoping that the waiting room had been left unlocked.

I had hardly settled down before I heard a loud clanging noise. I looked up in time to see a thin, gaunt and deeply tanned man in very strange attire rebounding off the right hand door to the station. He had clearly had a bit too much to drink.

I had the misfortune of him noticing me sitting inside, which spurred him on to try the second door, which opened. Such was his inebriated state that he collided with this door too. I quickly looked down and resumed reading, hoping to be left alone, except I promptly faced a grubby hand being shoved in my face in greeting.

If what he said was to be believed, he was a mountain guide, who had momentarily ‘misplaced’ his German clients. I didn’t ask what ‘misplaced’ meant but I did think I’d made the grave mistake of not leaving immediately when he said ‘I want to show you something’. From past experience abroad, this never bodes well.

I was momentarily relieved when he flipped open his ancient looking knapsack and pointed to a pair of shoes. ‘Look’, he whispered pointing at the gold glinting letters on the inside, ‘C.L.A.R.K.S. I must get them to a friend tonight’, with the utmost seriousness. It was however soon clear that he wasn’t in that much of a hurry to complete this task.

I wished him well and suddenly ‘remembered’ that I was going to meet my dad elsewhere. Gathering my things together, he told me that he wanted to give me a parting gift.

‘What do you know about mountain medicine?’ he said pulling out a bag of what looked like loose tea leaves. He gave me a handful in a little bag that I quickly picked up out of politeness and made to leave as soon as possible. ‘This is really good. Have you ever tried Prozac?’ his eyes flickered manically. Speaking each word seemed a considerable effort him.

Every time he blinked, I was under the impression that he might just keep his eyes shut and keel over for good. ‘This is much better than Prozac.’ Brilliant. He gripped my hand ‘In fact we should try some now. It really knocks you out’.

I made a quick getaway after he’d settled down and legged it back up the hill, rucksack in tow. I could hear him stumbling up behind me, muttering to himself. ‘Clarks. They are good shoe!’ Clarks should have been proud of the international proliferation of its brand.

I took refuge in Calalzo’s only open establishment, the biker bar (who’d have thought this was to become a safe haven?) and sat down in a corner to read Joseph Conrad’s Heart of Darkness, accepting a beer from the puzzled owner. ‘We don’t get many young women travelling alone in these parts’, he declared.

Later that evening I finally met up with my dad and we walked through the darkness to the campsite at the edge of town.

To see what we got up to on the rest of our trip or if you are looking for planning advice, the full table of contents can be accessed here. Alternatively, go to the next article in this collection: Day 4 – Grade 2 Via Ferrata Marino Bianchi – Cima di Mezzo.