The following is a bit of background as to why I chose to do this walk. If you wish to skip straight to the trip report, you can use the following links:

Day 2: Lower Nevis Falls to the Steall Waterfall via the Mamores 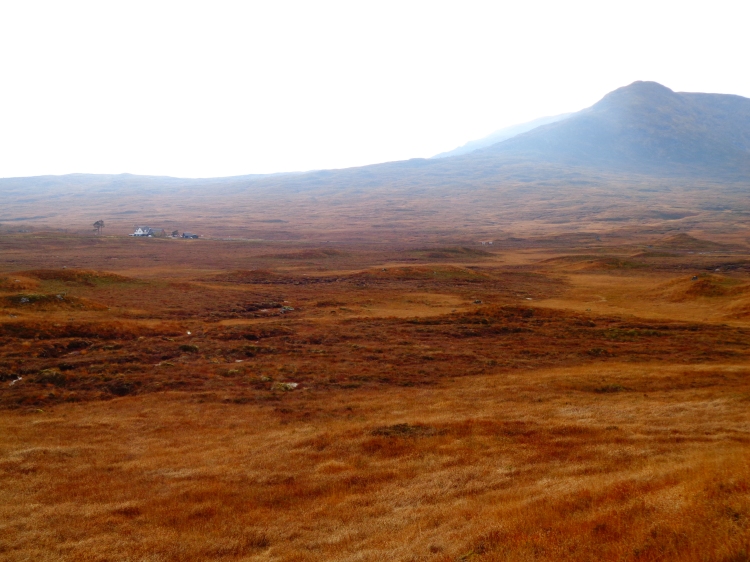 I first saw Corrour station on a train ride from Fort William to London. My fiance had lost his passport so we had to cancel our overseas cycling plans at the last minute and spent a week cycling from Edinburgh to Inverness and down the Great Glen to Fort William. The first few hours of the train ride back to London covered some spectacular scenery – the train snaked through immense tracts of moorland, forest and mountains and skirted the edges of lochs. For miles, our train wound its way through a beautiful but harsh wilderness.

Corrour Station is about an hour away from Fort William in the middle of expansive Rannoch Moor. It is dramatically overlooked by Leum Uilleim, a lonely Corbett and not much else. It doesn’t even have a car park and the only road is the dirt track which leads to Corrour Hunting Lodge located a couple of miles away across the moor.

The station consists of a lone pine tree on either end of the concourse and a dark green and white painted station house with a peaked grey slate roof. When Sir John Stirling-Maxwell had purchased Corrour Estate in 1891, the only way to reach it was on horseback, but he gave permission for the West Highland Railway Company to build a track across his land on the condition that a private station would be built for his guests to better access the estate. In places the train line was constructed on floating rafts across the deep bog and it remains an impressive feat of engineering to this day.

Two damp, ruddy-faced drunks had stumbled onto the train that day at Corrour. The one a tall, ageing, gangly man with sunken cheeks and a defiant stare, the other his antithesis – a podgy round-cheeked cheerful woman (beautiful once) with a long, silver ponytail of gentle curls. Prior to precariously stowing their backpacks away in the overhead storage and slumping into their seats in a fit of giggles, they unpacked several cans and two bottles of wine.

They diligently topped up every few minutes until they soon fell into a drunken stupor. With them were three greyhounds, who patiently settled themselves at their owners’ feet in the middle of the aisle, causing anyone heading to the toilets to get caught up in a tangled mass of greyhound limbs. One of the dogs had cataracts and he stared mournfully back at me through his milky eyes. I wondered what he could still see. A group of American tourists wrinkled their noses at the smell of sweat and alcohol.

I desperately wanted to ask the couple what they had been doing for the past few days but never quite plucked up the courage. I did however check whether it was possible to walk between Corrour and Fort William. It was about 20 miles to the upper car park of Glen Nevis and theoretically walkable in one long day.

At first I’d considered walking from Corrour to Fort William, but there was something that much more exciting about walking away from civilisation. I also wanted to spend a bit longer in the area, since the Caledonian Sleeper train from London is not cheap, even with a young person’s railcard. I bought flexi-tickets for a four day trip at the end of October, just after the end of the stalking season (in 2016 the season ended on the estate on 20th October) and obsessively started monitoring the weather forecast.

To the next article in this collection click Day 1: Caledonian Sleeper from London to Fort William. The Pony Track up Ben Nevis.